Justin Paperny is a co-founder of Prison Professors. He leads our marketing and consulting divisions.

Justin Paperny went to federal prison after he pleaded guilty to violating securities laws. As a graduate of the University of Southern California, Justin, and a licensed stockbroker, Justin didn’t have insight. As a white collar offender, he didn’t know where to turn for guidance. Without guidance, he was lost, without a pathway to prepare. 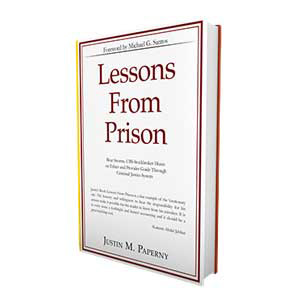 Justin surrendered to the minimum-security federal prison camp in Taft, California. He didn’t have a plan. In his interview today on the Prison Professors podcast, Justin describes his initial thoughts. He wanted to spend time exercising. He simply wanted the time to pass.

During his first several weeks in prison, Justin says that he found a new path. He describes learning how to serve his sentence in a deliberate manner. Insteading of waiting for time to pass, he started working toward goals. Those goals would lead Justin to return to society successfully.

The methodical activities Justin pursued while he served his sentence for securities fraud led Justin to build confidence. Rather than wasting time, he began investing time. He wrote to document his journey. When he left prison, he had a book to help launch his career. With Lessons From Prison, Justin began building platforms that would we would use to build digital businesses.

Justin concluded his sentence in 2009. With Lessons From Prison, he began building the new business. He connected with many lawyers. Those lawyers represented white collar offenders. Justin began to provide mentoring and coaching to those people. With his help, those people prepared. They put themselves on a path to get the lowest possible sentence and have the best possible experience.

Since concluding his sentence for securities fraud, Justin has mentored, coached, and consulted several hundred people. Besides PrisonProfessors.com, Justin operates WhiteCollarAdvice.com. He also operates BrandingFast.com. All of those ventures help people in struggle make better decisions.

Text PrisonPro to 44222 to receive brochure that shows how we can help you.

If you want to schedule a call with Justin Paperny, click here.